The Mid-Term Meeting involved members of the local focus groups and responsibles of each partner organisation, CEMEA del Lazio (ITALY), Associação Juvenil de Peniche (PORTUGAL), Keric (SLOVAKIA), Telecentro de Ayerbe (SPAIN), Chance for Life (ROMANIA) for the mid-term evaluation of the project development. In a first step they reviewed the learning within the project at personal, professional and organizational level working in small groups and after, in the large group, they shared the conclusions and summarized the best practices learnt. The new European framework on professional quality standards in qualified educational holiday centres was shared by everyone. Next, the partners shared the decisions of the local focus groups regarding the Quality Chart items chosen, because innovative, to be implemented during the Experimentation phase. They discussed how the experimentation will take place in each country and established a time frame of the activities. In the last part of the meeting partners talked about new project opportunities to be developed together and looked closer at the recently launched Erasmus+ programme that could support their collaboration initiatives. 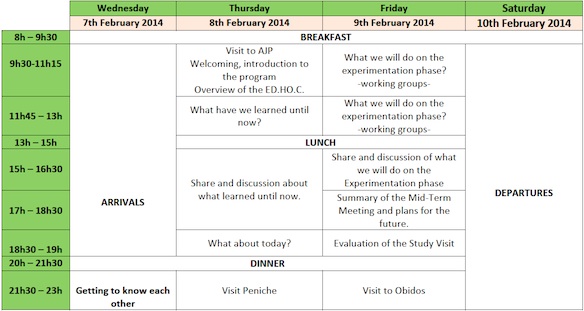 Where we will stay…

Peniche is a seaside city in Portugal, with approximately 28,164 inhabitants. Since ancient times Peniche has been an important fishing harbour. Besides fisheries, the economy of Peniche municipality relies on agriculture, services and tourism. Peniche is known for its long windy beaches, sought for recreational activities and sports such as surf, windsurf, body boarding or kite surf. Participants shall be hosted at the Hotel Soleil Peniche (http://www.residencial-maciel.com/).

Posted in: Get involved (SVE) This entry was posted on Monday, October 6th, 2014 at 10:47 am You can follow any responses to this entry through the RSS 2.0 feed.